I’ve been thinking a bit about role play recently – it’s something I’ve been doing for a good 10 years, though less so in the later years unfortunately, despite I love it, and I have to admit – I miss it. So I’ve started to look into medieval fantasy role play sims again. For me, it’s not so much about being someone else – I put a great deal of myself in my characters, because I feel it makes them all the more real. I play a wood elf/high elf in RP, and I’ve continued her story over about 3-4 years now (nearly my entire time in Second Life) and I quite like that. I’ve met some great people, experienced love, joy, made friends for life, experienced heartache too and everything that comes with interacting with people, and aside from a few incidents, I would not have been without it. 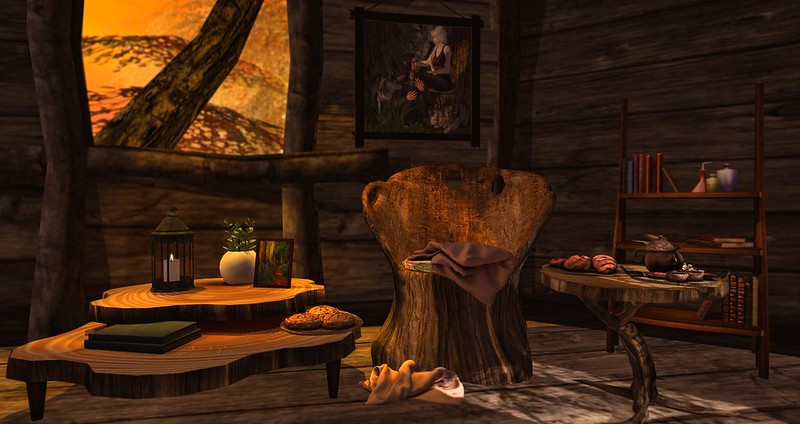 In this post, I have used the tree house on our land, which I’ve placed down when we initially set up the land, since it has a very special place in my heart. I first lived in this tree house back when I first joined Second Life at my dear friend and sisters, Nessa, beautiful sim, Telrunya. ♥ She is also the landscaper behind The White Armory and Lost Unicorn.

For We ❤ RP, Wishbringer has released a very cute furniture set that fits what I feel should be an elven home – lots of wooden furniture. ♥ I am so glad that some creators still make natural looking wooden furniture – it is very hard to come by in Second Life, so when opportunity presents itself, I am all over that! ♥ And of course, there can be no home without food on the table. In this photo, I’ved used The Half-Moon Markets “The Lord’s Feast.” The set also comes with a large roast, which looks really awesome. And now to another of my favorite items in this photo – the blanket clutter from Half-Deer! ♥ She has given us some awesome releases in terms of clutter throughout the years, and this is no exception. Underwear clutter, Bikini clutter, fast food – you name it! And I hope, she keeps doing this, because it’s so great and really creates a feeling of “home” to me. Needless to say my non-fantasy home is cluttered with blankets for the fall! 😀